Tom initially scheduled an Ottawa workshop for July 21 and it immediately filled up. There was SO much demand for his workshop that Tom graciously added an extra one on July 20!! That tells you it's going to be great! Oh, and the fact that someone came all the way from L.A. to Ottawa to take Tom's workshop - you know its going to be great!

Who is Captain Tom?


Tomas Pajdlhauser (aka Captain Tom) is an artist and Creative Director based in Ottawa, Canada and co-owner of Birling, a local skateboard brand and shop.

By day, he works as an Art Director for animated TV shows and movies and has worked with clients including Disney, Warner Brothers, Nickelodeon, National Geographic, and Mattel.

Tom sketches and hosts many workshops http://captaintom.studio/workshops-1/ , which also include  animation and storytelling workshops with youth, and he has traveled extensively around the world and shares his incredible sketches online. Visit the links below to see his sketches from:
Those of us in Ottawa who were fortunate enough to take part in this GREAT workshop this past weekend (two groups of fifteen) wonder how Tom finds any time to share his knowledge with others given ALL that he is doing and we also wondered why he isn't at the International Urban Sketching Symposium happening in Amsterdam (Jul 24-27) hosting a workshop there? 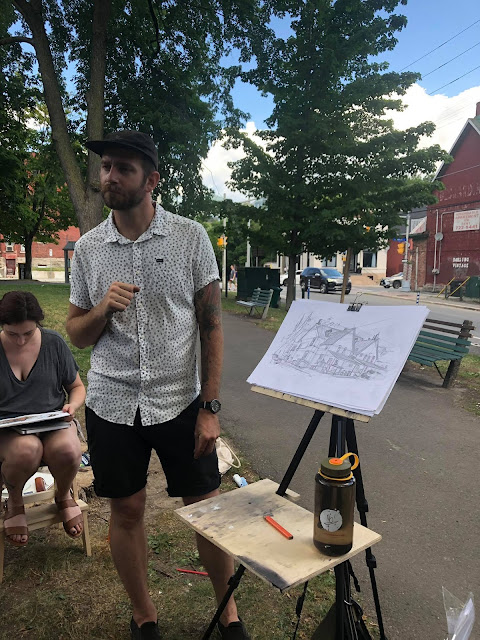 Tom believes that if you "mess up perspective ... proportions ... it tells your audience that you really don't understand what you are drawing". In order to be "effective", you must fully understand these fundamentals first before "warping and exaggerating".

Using a Lyon Street urban scene, Tom demonstrated how to identify your horizon line; identify perspective, rough in proportions and sketch in details (working from big to small). This is "what happens in my head for about five to ten minutes before I even start sketching", said Tom

After Tom's demonstration, participants were given time to do a pencil sketch and practice achieving proper perspective, proportions to effectively translate a 3D object (the view of Lyon street) on to their 2D page and it was challenging for everyone. As Tom put it to the participants in the debrief, he observed that everyone "experienced equal parts of frustration and joy" with this morning exercise.

Tom encouraged everyone to continue practicing perspective every day (by drawing a car, a couch, etc) and he highly recommended the book "Perspective Made Easy" by Ernest Norling and said its the only book you'll ever need. (Available online at http://www.storytellerartist.com/documents/Perspective_Made_Easy.pdf )

In the afternoon, Tom demonstrated his approach to creating his signature expressive urban sketches.

Tom started the demo by penciling in a minimal amount of detail ("just a reminder") and then went directly to ink using his fountain pen (loaded with Platinum Carbon Ink and a Zebra G Nib which he swears by!). "It's terrifying. Every line is the final line." said Tom, but it is his trademark process and requires that you be fearless, embrace mistakes, and adapt along the way.

Working left to right, Tom inked the entire scene with incredible skill and detail while offering the participants many, many hints along the way such as what to add, what to delete and various cinematic tricks to lead the eye. With respect to Tom's trademark ink and paint splats and pencil lines he said, "This is my meditation .... I love seeing other artist's pencil lines and mistakes ... other artist's humanity. "

And these are the reasons why we, Tom's many followers, love his work so much. His humanity shows through in every sketch and his love for urban settings like Centretown where he lives, works and sketches shows through as well.

Tom said, "Centretown is defined by it's red brick buildings, yellow ochre traffic lights, sap green trees, as well as hydro lines, satellite dishes...." etc. and Tom wants it all in his sketch. It's what he loves about his city!

Everyone reported that they had been challenged and were walking away having learned so much. There were hints of possible future workshops that Tom has been thinking about. That was great news indeed!

On behalf of everyone in Ottawa (and from L.A.) who were fortunate enough to attend - thanks so much Captain Tom! We can't wait for your next workshop!

This is an archive of the Ottawa Urban Sketchers Blog